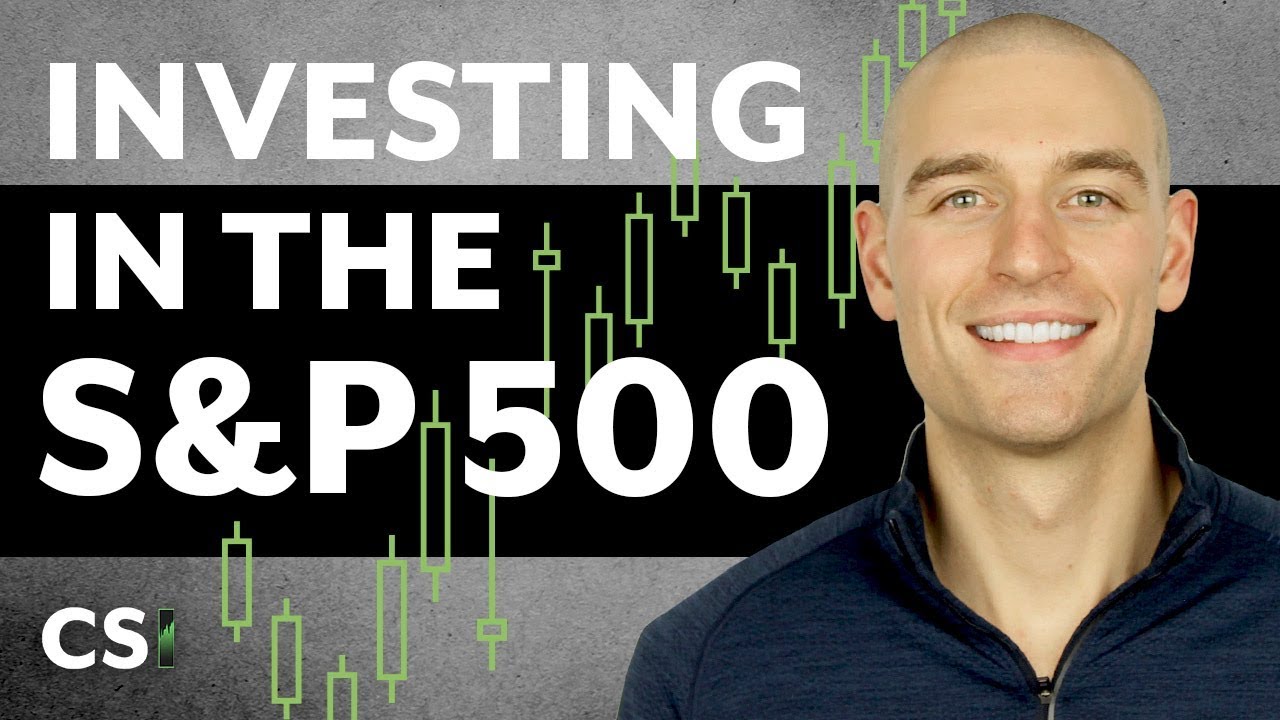 Interest in my Common Sense Investing channel has grown a lot recently, which is awesome! Thanks to everyone who has subscribed, and especially to those of you who are posting your comments and questions on my YouTube channel. To say the least, the interaction makes these projects feel especially worthwhile.

But enough about Common Sense (for now). Let’s talk about the S&P 500 Index, one of the oldest and most familiar stock indexes in the world. According to the S&P Dow Jones Indices website, the S&P 500 tracks 500 U.S. stocks that cover roughly 80% of available U.S. market capitalization. As of August 1, 2019, investors have invested approximately $3.4 trillion USD in index funds that track the S&P 500 Index.

That is a lot of money invested in 500 U.S. stocks. To many, the S&P 500 is practically synonymous with index investing. There have to be a ton of people out there who refer to themselves as “index investors,” while only investing in the S&P 500.

Maybe that’s because the investment has worked out really, really well. On average from 1980–May 2019, the S&P 500 has beaten the CRSP 1-10 (a total U.S. market index), with less volatility. The S&P 500 has also outperformed most of the active fund managers who have tried to beat it. For the 10 years ending December 2018, the S&P 500 had beaten more than 97% of Canada’s actively managed U.S. equity mutual funds.

But that’s what the S&P 500 has done for us lately. Does past, incredibly strong performance strengthen or weaken our expectations on its future returns? Let’s say this: Before you invest every dollar you have in this popular index – or leave every dollar there if you’re already in it – let’s review the reasons why building and maintaining a globally diversified portfolio probably makes more sense over the long-run. The S&P 500 Index may be huge and well-known, but it’s not everything.

Past Performance and Great Expectations

One of the most compelling arguments for investing in the S&P 500 is its past performance. Especially since the end of the financial crisis of 2007–2008, its risk-adjusted performance has been staggering. And by “staggering,” I mean almost impossibly good.

Buckingham Strategic Wealth Chief Investment Officer Jared Kizer wrote a Multifactor World blog post in late 2018, where he examined the performance of the S&P 500 from March 2009–October 2018. He used a method called “bootstrapping” to show that the S&P 500’s performance over that time period was almost too good to have been statistically possible.

The bootstrapping involved taking all of the S&P 500’s historical monthly returns from 1926–October 2018, and drawing out 116 monthly returns to create a returns series that is the same length as the period from March 2009–October 2018. This can be done countless times to simulate possible outcomes using the actual historical data as a sample set.

Kizer ran 100,000 simulated 116-month periods, and compared them to the actual performance of the S&P 500 Index. His findings were remarkable. Of the 100,000 bootstrap samples, only 0.57% of them had better risk-adjusted returns than what the S&P 500 actually achieved from March 2009–October 2018. In other words, the index’s actual performance was almost outside the range of statistical possibility.

The main takeaway from this analysis – and the point I want to make – is this: The S&P 500 has recently produced fantastic performance, but the probability of that performance repeating itself is extremely low. As always, past performance does not predict future performance. But in this case, we have statistical evidence to show just how unlikely it is that we’ll see a repeat performance.

Further to this point, the S&P 500 is a lot more actively managed than most people realize. The stocks that make up the index are not chosen by a passive algorithm to represent the 500 largest stocks in the U.S. Rather, they are selected by people. Granted, there are selection criteria; the goal is to build an index that proxies large-cap U.S. equity markets. But it’s still a committee of humans making the ultimate decisions on inclusion and exclusion.

Injecting a human element makes it even less likely that exceptional past results will repeat. I mentioned above that the S&P 500 covers roughly 80% of the U.S. stock market capitalization. That’s pretty good coverage by market cap, but less so if you consider that there are around 3,500 U.S. market stocks. Owning only 500 of 3,500 available stocks leaves substantial room for error if you’re seeking the returns of the total U.S. stock market. Even further to that point, there are many more thousands of global stocks. Owning only 500 of that total leads to an even higher chance you’ll miss out on some of the equity risk premium available from around the world.

Arizona State University Hendrik Bessimbinder just published a new paper entitled, Do Global Stocks Outperform US Treasury Bills? He and his co-authors studied the performance of 62,000 global common stocks from 1990–2018. They found that 1.3% of those stocks – or just 811 of them – explained all of the wealth creation in excess of what could have been earned by investing in Treasury bills. Identifying those 811 stocks in advance would have been like finding a needle in a haystack.

This again suggests that global diversification is the answer. Based on studies by Bessimbinder and many others, we know that a small number of stocks have driven most of the wealth creation in the U.S. and global markets over time. We also know that smaller stocks tend to beat larger stocks over the long-term, and that many of these smaller U.S. stocks are not in the S&P 500. Thus, while the S&P 500 has been able to beat both the general U.S. market as well as global markets lately, the likelihood of that performance persisting remains low. Abandoning diversification could come with a hefty price to pay

The fact that the S&P 500’s constituents receive global revenue does not offer you, the investor, the benefits of global diversification. A 2019 Vanguard paper addressed this question. The authors showed, while U.S. stocks had the lowest volatility of any country from 1970–September 2018, a global market-cap-weighted portfolio had even lower volatility.

To substantiate this point, we can simply turn back the clock and look at past returns from U.S., Canadian, and international stocks.

The most recent decade has favoured U.S. stocks. But if we go back to January 1970–June 2009, we find that Canadian, U.S., and international stocks all had very similar returns. Over that period, the S&P 500 returned 9.66% while the MSCI EAFE returned 9.28%, and the S&P/TSX returned 9.42%, all in Canadian dollars. The U.S. still had a small edge, but a rebalanced portfolio split equally across Canadian, U.S., and international stocks returned 9.84%, with lower volatility than any of the individual countries alone. Behold, the “free lunch” of diversification at work.

The Vanguard paper also addresses another argument I’ve heard against global diversification: With increased correlation among global stocks, are the benefits of diversification disappearing?

Although correlations have increased, this does not tell us the whole story, because the dispersion of U.S. and non-U.S. stock returns has remained wide. In other words, even though markets may tend to move more in the same direction than they used to, the magnitude of those movements has continued to be very different from country to country. This means there is still a substantial benefit to be expected from global diversification.

A 2011 paper from AQR looked at 22 developed markets from 1950–2008, examining the effects of diversification over short- and long-terms. Given the unpredictability of short-term stock returns, investors should be most interested in pursuing long-term outcomes.

The authors found that short-term downturns can be driven by investors’ changing risk preferences (or “panics”), while longer-term results are driven more by countries’ economic performances. The paper concludes: “Diversification protects investors against the adverse effects of holding concentrated positions in countries with poor long-term economic performance. Let us not fail to appreciate the benefits of this protection.”

As the AQR paper implies, we must always remember that the world can change – sometimes dramatically. The U.S. stock market currently makes up roughly 55% of the global market capitalization, but that has not always been the case. In 1989, Japan made up 45% of global stock market capitalization, while the U.S. was sitting at only 29%. Now, Japan makes up roughly 8% of global market cap. From January 1989–June 2019, Japanese stocks have returned 0.61% per year on average in Canadian dollars.

Bottom line, betting on any one country, no matter how dominant it appears to be at the time, increases the likelihood you may eventually experience a bad outcome if your concentrated bet goes sour.

No discussion about U.S. stocks and the S&P 500 is complete without mentioning valuations. You all know that I am not a market-timer, but it is well documented that current valuation is the best (if still imperfect) predictor of future returns. When prices are high, future returns tend to be lower.

I am not saying you should bet against U.S. stocks by trying to time exactly when – or if – their P/E ratio may fall. We know that valuations can continue to rise for a long time. But betting exclusively on the most expensive market in the world does not seem sensible either.

So, I have now explained:

All that said, if you are currently using the S&P 500 for your U.S. equity allocation, it’s not the end of the world. Compared to an actively managed fund or a stock-picking strategy, the S&P 500 is extremely well diversified, and it can be accessed for almost no cost due to the massive scale of the ETFs tracking it.

However, the S&P 500 is not the only index you should own in your portfolio, and it probably isn’t the best index to own for U.S. stock exposure. As usual, the best bet most investors can make in our uncertain world is to bet on the lmarkets in general. This is best accomplished through long-term investments in a low-cost, globally diversified portfolio of total stock market index funds.

Do you invest in the S&P 500? Will you still? Tell me about it in the Common Sense Investing comments, and then tune in to weekly episodes of the Rational Reminder Podcast wherever you get your podcasts.