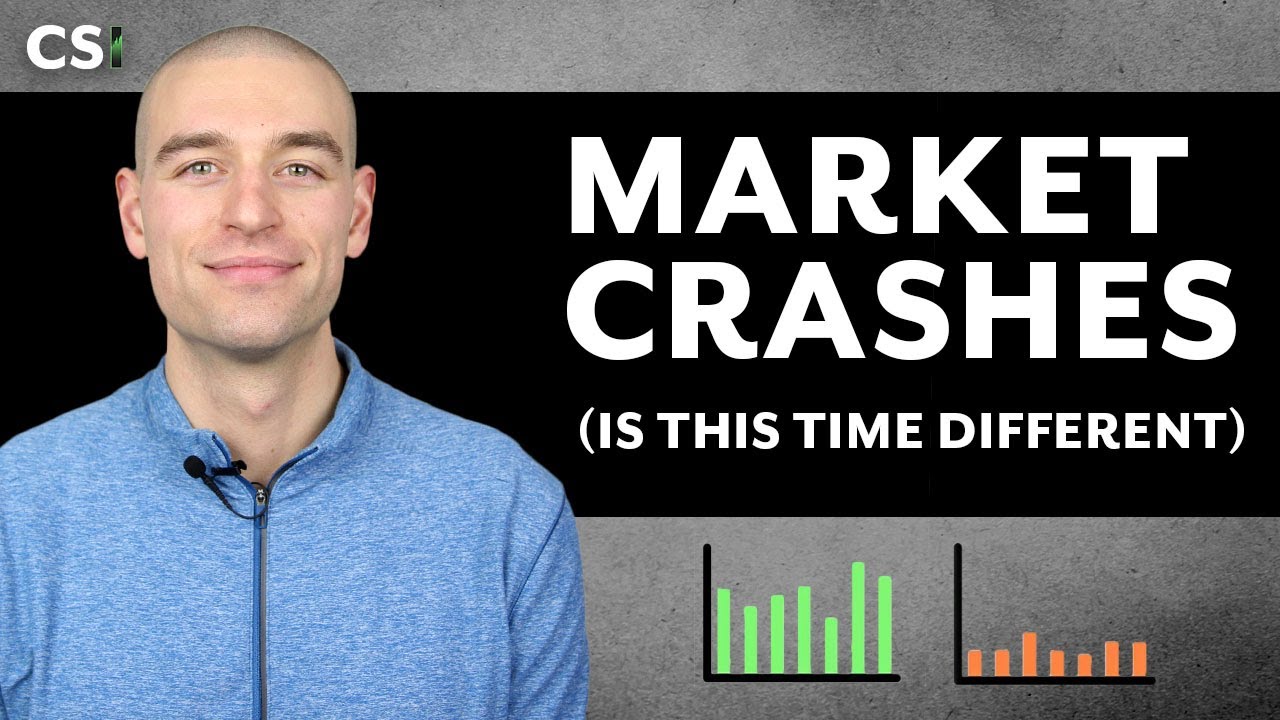 Stock prices reflect investors’ expectations about future profits and risk. When those expectations change, as they do frequently, prices change, and they can change dramatically. Volatile stock prices do not mean that the market is broken or that the world is ending; sharp price declines are expected from time to time in an efficient stock market, and their inevitability should be built into every investment plan.

I think that most people understand this, but there’s a problem: every market drop feels different. There is always a narrative, and the narrative is often scarier than the drop itself. If we can understand the power of a compelling narrative to make us behave irrationally, we might be better equipped to make better decisions, and feel less anxious, when the stock market declines.

In this new entry of Common Sense Investing, I am going to tell you how to keep your head down and stay invested, even if this time is different.

To get through periods of market volatility I think that we need two pieces of mental equipment: we need to understand how we as humans are wired to behave, and we need to understand what the data say about market drops. Being aware of both the data and the impact that narratives can have on our behaviour should help us make more rational decisions.

In Robert Shiller’s 2017 paper, Narrative Economics, he explains “Narratives are human constructs that are mixtures of fact and emotion and human interest and other extraneous detail that form an impression on the human mind.” Narratives can be extremely powerful. Through the framing effect they can change how we view facts, and through the representativeness bias they can cause us to ignore base rate probabilities while drawing parallels between our current situation and familiar narratives.

A narrative does not change the facts of a situation, but it can easily change how people respond to it. It is important to remember where this information is coming from. Robert Shiller is the Yale economist who won the 2013 Nobel Prize in Economic Sciences for his work on bubbles in asset prices. Shiller defines a bubble as a “social epidemic that involves extravagant expectations for the future.” It is not hard to see the connection between narratives and their potential effect on asset prices and the economy.

Shiller explains the narratives that may have played a role in some of the biggest economic events of modern history. For example in the 1920-1921 US recession, the narratives were grounded in terrible recent events. World War I had ended 14 months prior, the effects of the 1918 influenza pandemic were still lingering, the US had been dealing with race riots, and a public fear of communism was growing. Combined, these were the basis for an unsettling narrative of economic uncertainty.

To top it off, US oil prices jumped 50% between mid 1919 and the end of 1920. The dominant oil narrative was that the demand for oil was outstripping supply due to the increasing uptake of automobiles, the nation’s oil supply was expected to be depleted within 18 years. Looking back now we know that didn’t happen because we found more oil, but you can imagine how that narrative might have affected expectations about the future.

Based on how the world looks today, the influenza pandemic of 1918 is particularly interesting. We don’t know what the exact economic impact was, but a 2007 paper from the Federal Reserve Bank of St. Louis aptly titled Economic Effects of the 1918 Influenza Pandemic: Implications for a Modern-day Pandemic offers some insight.

The 1918 flu is estimated to have killed 675,000 people in the United States and 40 million people around the world from the spring of 1918 through the spring of 1919. Males aged 18 to 40  were hit the hardest. Between the sparse available economic data and anecdotal evidence from newspapers we can estimate that the major economic impacts were a reduction in labor supply resulting in a higher cost of labor, and a short-term but substantial revenue reduction for businesses, particularly in retail and entertainment.

We cannot say with certainty if the recession that followed was caused by the flu or the confluence of other factors, but we do know that the S&P 500’s cyclically adjusted price earnings ratio dropped to its lowest level in history in December of 1920. That hurts. But guess what happened next? Asset prices came screaming back up. To be fair, they did fall sharply again in 1929, but guess what, they rebounded afterward, although a bit more slowly the second time.

Ok Ben, you might be thinking, but that’s a clear case of survivorship bias. We can’t assume that all market crashes will be followed by rebounds like we have seen in the US. Well, do I have news for you.

The phenomena of markets bouncing back after crashes was studied by William Goetzmann and Dasol Kim in a 2017 paper titled Negative Bubbles: What Happens After a Crash. They studied stock market crashes from 101 global stock markets from 1692 to 2015 and identified 1,032 events where a market declined by more than 50% over a 12-month period. They found that the probability of a large positive return is higher following a crash.

They note that following a crash investors tend to decrease their allocation to stocks, but based on the empirical data supporting rebounds after crashes, reducing your equity allocation might be the worst thing that you can do. Remember, this large empirical dataset is immune to any narratives when we observe it. Each of those 1,032 crashes were probably accompanied by intimidating reasons to expect worse things to come, but we can step back and observe the outcomes, free from the accompanying narratives.

Knowing that the data on market crashes going back to 1692 suggest that sharp declines are usually followed by large positive returns, we as investors have some challenging decisions to make during times of market turbulence. If we get out of the market to avoid a drop, we also need to get back in. Getting back in at the wrong time might mean missing out on the rebound gains.

Take the S&P 500 going back to 1926 through the end of February 2020 as an example. It had a compound average annual return of 10.08% in US dollar terms over the full period. If we remove the top 10 monthly returns, that is the top 0.9% of months in the period, the annualized return drops down to 7.74%. But here’s the tricky part, most of those top returning months occurred during or after big drawdowns. If you got out, you may have missed out.

If the alternatives were the chance of missing out on the best months or losing all of your money permanently, I could see how someone might choose the missed good months. Let’s think for a moment about the concept of losing all of your money in stocks. When you buy stocks, you are buying ownership of expected future earnings from real businesses. You pay a price for those expected earnings based on how risky the businesses are.

When stock prices drop, it means that expected future earnings have decreased, businesses are riskier, or some combination. To lose all of your money in a globally diversified portfolio of stock index funds, we would need to be in a situation where nobody expects any business to earn any profits in the future. This is an extreme case, and it seems fairly unlikely.

A more realistic set of alternatives might be missing out on a few good months or having to watch your portfolio decline for a period of time. This is where narratives and asset allocation become equally important. Narratives will make us believe that this time is different. And the narrative might be different, but challenging and uncertain times are nothing new.

Just this century we have seen the  , while the MSCI All Country World Index delivered an average annual compound return from January 2000 through February 2020 of 6.56% in Canadian dollar terms. The World Bank estimates that a global influenza pandemic similar to the one in 1918 would cost the modern economy 3 trillion USD, or up to 4.8% of gross GDP. In their 2009 Global Financial Stability Report the IMF estimated the cost of the 2007 – 2008 global financial crisis at 4 trillion USD from write downs on bad assets alone. I’m not saying that this time isn’t different, but I am saying that investors have a long track record of being compensated by positive expected stock returns in exchange for taking risk.

Narratives are powerful and often important, but they can affect the way that we interpret facts. I think that it’s important to step back and look at the broader set of data before responding to an event like a meaningful decline in stock prices.

Regardless of the narrative, you should be invested in an asset allocation that you can stick with in both good times and bad. Getting out when things get bad is one of the best ways to sabotage your persistently positive expected stock returns. If living through a stock market drop has been too painful, it might be a good time to ask yourself if you were taking too much risk to begin with.

I’m not an epidemiologist. Most people are not epidemiologists, and most epidemiologists are not economists. Figuring out how the economic impacts of a global health crisis will play out is a challenging task for anyone. The market has responded by pricing in lots of new known information, and lots of big unknowns. Uncertainty increases risk, driving down asset prices, and driving up expected returns. When the market declines, it is not time to get out. This is when equity investors earn the equity risk premium.

I am not saying that this won’t be hard. The market might keep dropping. After each subsequent drop the decision not to sell after the previous drop might seem regrettable. Everything is obvious in hindsight. On any given day, including after a market drop, the best thing that we can do is stick to the plans that we made in calmer times.

The economy might take a big hit, but this is why you had an emergency fund. Stocks might continue to drop, but this is why you invested in a risk-appropriate portfolio. In the moment, when things are uncertain, it can be challenging to make good long-term decisions. This is why you made a plan, and now is the most important time to stick to it.