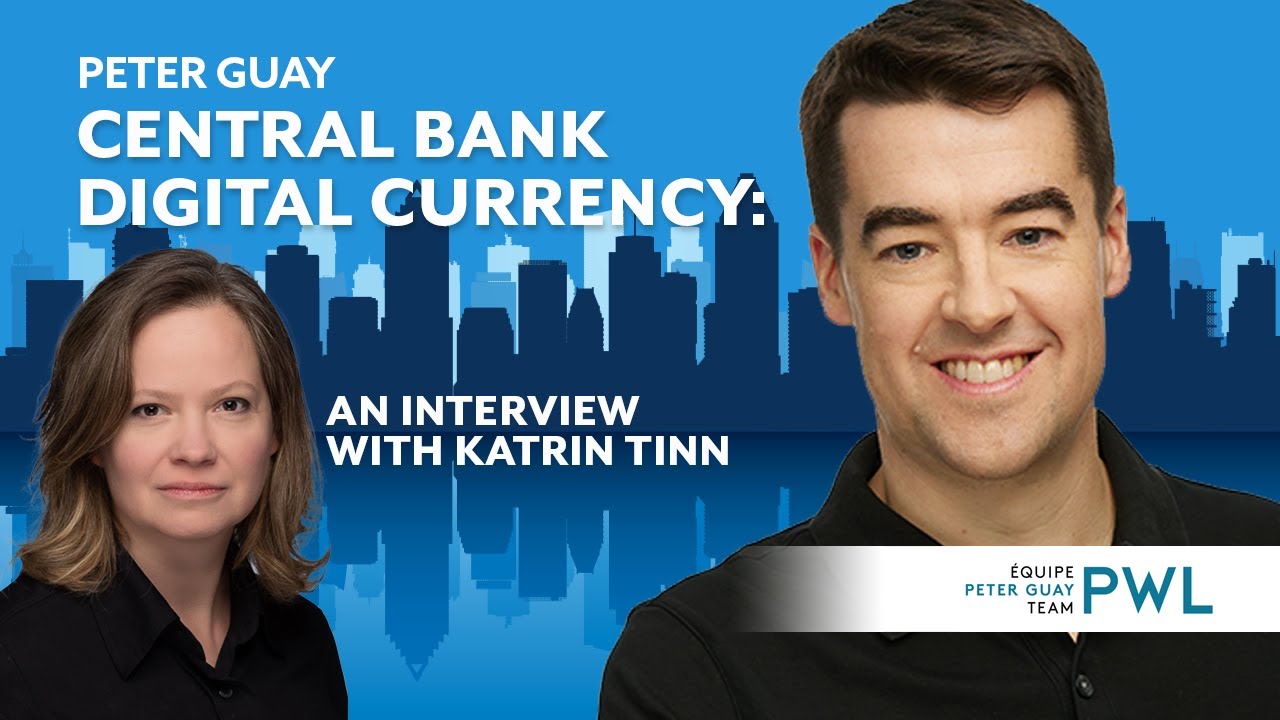 Peter Guay:     I’m thrilled to have a great guest with me today to talk about the future of digital currencies. Katrin Tinn is an Assistant Professor of finance at McGill University’s Desautels Faculty of Management where she focuses on applied theory in financial economics and information economics.

In 2020, the Bank of Canada launched the Model X challenge, which invited experts to propose a design for a Canadian central bank digital currency. Out of 20 submissions from teams across North America, the McGill proposal, from Tinn and Christophe Dubach, an Associate Professor in McGill’s Department of Electrical and Computer Engineering, was selected as one of three to receive additional funding from the bank for further research.

I’m excited to be talking to Katrin about the McGill proposal and some of their research into digital currencies today.

To start with, congratulations on your proposal being accepted into the top three, Katrin. That’s a wonderful achievement.

Katrin Tinn:     Yes, absolutely. As you said, the Bank of Canada and other central banks, like the European Central Bank, are thinking about central bank digital currency designs. Of course, there are many choices, but the issue of privacy and the possible trade-off between privacy and compliance with, for example, anti-money laundering regulations, is really at the centre. Physical cash is very private because what validates a transaction is the bank note itself. Nobody really knows who spends this note.

Now, things are very different when we are thinking of credit card payments or payments using the tools provided by technology firms because these are versions of account money where what validates the transaction is knowing who makes it and who receives it. In this environment, one would worry that anybody’s purchasing decisions—for example, if they buy alcohol, if they buy medicine, if they consume entertainment—could somehow negatively affect, for example, their bank loans or their ability to get insurance, and so on. Research has also shown that little things like whether you buy things using an iPhone versus an Android-based phone can affect your credit-worthiness. Or when you buy things: Do you do it in the afternoon or do you do it in the late evening? There are a lot of consumption choices that people are making where it could have unintended, dangerous consequences if they can’t make those choices privately.

Katrin Tinn:     It is a concern for economists and people in finance as well as, of course, the central banks. Their thinking has evolved from what is called wholesale central bank digital currency, where the main purpose would be to facilitate interactions between the central bank and financial institutions, to retail CBDC, which is effectively aiming to be a replacement for cash.

The central bank is interested in the fact that the use of physical cash is decreasing because people are increasingly using existing digital means of payment. For them, there is the question of remaining relevant as a central bank and maintaining control of monetary policy

Katrin Tin:        Traditionally, central banks have always been in control of the money supply. And when you read the discussions by the central banks, one worry is that—with the prevalence of other means of payments, including cryptocurrencies—their ability to control the monetary policy via cash and other aggregates is a question mark. So, that’s why central banks are considering CBDC. The Bank of Canada explicitly considers central bank digital currency as a contingency plan, and this is one of the arguments they are emphasizing.

At this moment, cryptocurrencies are not endangering the monetary system because they are not used for normal transactions. No one is buying coffee with it. However, there are institutions like Facebook that are thinking about issuing digital currency.

Katrin Tinn:     Yes. Exactly. And of course, a firm like Facebook is very different from a country. It has many users all over the world. So, if for whatever reason, the Diem system would become a popular currency, it would be potentially bigger than any country, even the biggest countries like the United States.

Peter Guay:     One of the issues that makes Bitcoin very difficult to use as a store of value, or for day-to-day transactions, is that it varies in price so much from one day to the next. The volatility in trading of Bitcoin is quite large. How would a central bank digital currency help or change or improve that for digital currency markets?

Katrin Tinn:     The main difference between central bank digital currency and Bitcoin is that it is officially issued by a central bank. So, it comes with guarantees, including that it is always convertible to the physical version of the Canadian dollar, for example. And it can also be made legal tender, meaning that firms have to accept the digital currency as a means of payment. By contrast, it is absolutely voluntary for any firm to accept Bitcoin as a means of payment. This uncertainty about whether Bitcoin will be accepted or not is probably one of the reasons behind its volatility. Of course, it has other issues regarding the cost of recording transactions.

Peter Guay:     Right. Recording transactions on the Bitcoin blockchain is time-consuming and costly.

Katrin Tinn:     Exactly. Because especially in the case of Bitcoin, it is based on the concept of proof of work, which uses a lot of computer power to validate transactions and it takes time. At a larger scale, that doesn’t look very sustainable. Of course, there’s a lot of thinking going on in the crypto world about how to make transactions less costly and faster. But it’s definitely one of the issues. It’s very difficult to have simultaneously such a high degree of decentralization and also speed and efficiency.

Peter Guay:     One of the contentions in favour of central bank digital currencies is that they can improve financial inclusiveness. Can you speak to that idea?

Katrin Tinn:     Of course, this issue varies across countries. In many countries, there are people who do not have access to bank services. They don’t even have access to means of payments. And even in countries like Canada, where most people are included in the financial system, there are still people who are not included. One important priority for the central bank is that it will have to be possible for everybody to use the CBDC, even those individuals who don’t have a normal bank account.

When pretty much everyone was using cash, it was not that much of a problem. But if only a few people would still like to use cash while everybody else is using bank cards, maybe firms won’t want to deal with cash because it is costly. This could become a bigger problem over time.

Peter Guay:     Coming back to the privacy issue, one of the defining characteristics of your proposal is the notion of asymmetric privacy. Whereas cash is completely private, in your proposal for central bank digital currency the payer would remain anonymous, but the receiver would be recorded and tracked by the central bank. Can you explain why your proposal is structured this way?

Katrin Tinn:     The key issue here is that the central bank wants to balance privacy with compliance with anti-money laundering regulations and so on. Cash has been used for money laundering for a long time but when we have financial innovation why continue like that? Second, as we argue in our proposal, there are very few reasons to keep the money received private because most money received is already liable to taxation. In fact, we can improve tax collection and perhaps make taxes lower. Firms and individuals that operate legally don’t really lose anything. So, one justification for our proposal is that you achieve better compliance with regulation while having little loss in having this part of the transaction less private.

Furthermore, when money received is recorded, you can offer better financial contracts and have better financing for firms and individuals. In a traditional world where both sides are symmetrically private, it actually makes financing more costly. Firms need to voluntarily disclose what they have earned and spend money on auditing and checking whether the records are accurate. That leads to typical debt contracts, which are good in terms of minimizing monitoring and auditing costs but come with other negatives. So, it’s a combination of all these things. There are benefits to keeping privacy of spending for many reasons, but for money received there is less to lose and a lot to gain by making it a bit less private.

Peter Guay:     To sum up, when you think about the Bank of Canada issuing a digital currency, the attraction for spenders is it remains private. They’re no longer giving their information on consumption habits to their bank. But more importantly, they’re not giving their information to the Apples and Googles of the world through the current digital payment systems. On the flipside, for receivers, it’s legal tender and therefore it has to be accepted by all institutions. That’s more the stick than the carrot way of imposing its use. But it’s also stabilized by the foundations of the same Canadian dollar that we all use, so the volatility issue is dealt with, compared to accepting other digital currencies. And finally, the point you just made is a really interesting one because I think it drives adoption from the receiver’s end. It reduces the cost of financing for the receiver because it simplifies financing contracts.

Katrin Tin:        Absolutely. Imagine a firm that normally struggles to get financing. If the firm can credibly say: I’m accepting payments mainly in digital currency, hence you can validate what I am earning. The firm can ask for very different sorts of contracts. They may be more equity like and perhaps better than equity because they come with some sort of insurance. If things go badly and you don’t sell a lot, you pay back less to your investors versus when you are earning a lot of revenue, you can offer them a bigger proportion.

Similarly, for individuals, imagine a student loan, for example. Some students end up earning a lot of money after they graduate, some less so. So why not have student loan schemes that are reacting to the student’s future income. If they are unlucky in the job market they pay back less and if they earn a lot, the pay back more. So, for firms and individuals having this reliable record of transactions can make many forms of raising financing easier.

Peter Guay:     Your example of the student loans, brings us into the area of social programs more broadly. We discussed monetary policy, but a central bank digital currency can also be useful in the application of fiscal policy. Can you speak to that?

Katrin Tinn:     We haven’t discussed some of the details of our proposal, but in it anyone using this system would have an account as an individual that is linked to their ID and the same for firms. Privacy is achieved by having people turn their money from the central bank digital account into private coins, which they can use without digital trace of what they have spent it on. But the mere fact that everyone has an ID-linked account would make sending government subsidies and transfers to individuals and firms very easy. Imagine if this had been existing at the time of COVID, the process of sending benefits to those that qualify would have been a lot easier.

Peter Guay:     Katrin, this has been a fascinating conversation. Thank you.

This interview has been edited for length and clarity.

Peter joined PWL Capital in 2004 to learn the business from the ground up. After 17 years, many designations and an MBA later, Peter is now the Leader, Portfolio Manager and Financial Planner in the Peter Guay Team.
Contact Peter
More from Peter